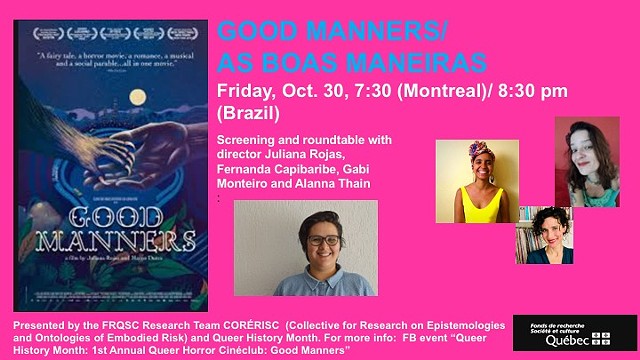 Friday, Oct. 30 7:30 pm in Montreal and 8:30 pm in Brazil, join us for the first annual Queer Horror Screening at McGill's Queer History Month: a screening and roundtable discussion on the queer Brazillian horror film "Good Manners" (As Boas Maneiras), with director Juliana Rojas, Fernanda Capibaribe, Gabi Monteiro and Alanna Thain. "Clara, a lonely nurse from the outskirts of São Paulo, is hired by mysterious and wealthy Ana as the nanny for her unborn child. The two women develop a strong bond, but a fateful night changes their plans." (imdb.com). A brilliant and contemporary take on vulnerability, danger and bodies under the influence of love, desire, violence...and the moon.

Fernanda Capibaribe Fernanda Capibaribe is a Professor at the Communication Department at the Federal University of Pernambuco (UFPE), and a photographer. Currently in her second stay as a Visiting Professor at McGill University, she has a PHD in Communication Studies by UFPE and a Master in Culture and Society by the Federal University of Bahia. Has been working for more than 15 years connecting the fields of Photography, Audiovisual, Gender Studies, Queer Theory, Feminist Studies and Cultural Studies. Along this period, has been developing research projects associating feminist / queer poetics and geographies, through the bias of critical feminist theory and philosophy of images. In her approach, she addresses themes related to cultural bodies, experiences of sex / gender and politics of dissent. Has taught courses such as: Introduction to Photography, Cinematography, Gender and Audiovisual Studies, Feminist Poetics and Visual Culture, among others. As a photographer, she participated in various events and exhibitions, as well as in processes of creation, production and post-production in cinema and audiovisual, evaluation committees and curations.

Gabi Monteiro Gabi Monteiro is from Caruaru, an inland municipality in Pernambuco, in the Northeast of Brazil. She has worked in several social movements, mainly related to women's rights, black population, youth and family agriculture. She was a political educator for the MMTR-NE, Movimento da Mulher Trabalhadora Rural do Nordeste (Northeastern Women's Rural Workers Movement) for years, and in her Master's research she wrote about the power of counter-hegemonic narratives produced by rural feminists. She has a degree in journalism, an expert in Gender, Development, and Public Policy, and a Masters in Gender Studies, Women, and Feminism. She is also a scriptwriter and audiovisual director. She was an advisor to the Frida Fund for Young Feminists, a consultant for UNICEF Brazil's Adolescent Development and Participation Program, and is currently the Youth Officer at the United Nations Population Fund (UNFPA) in Brazil.

Alanna Thain Alanna Thain is Associate Professor at McGill University and director of the Moving Image Research Lab, devoted to the study of the body in moving image media. She also directs the FRQSC research team CORÉRISC (Collective for Research on Epistemologies and Ontologies of Embodied Risk) and the four-year project "L'horreur dans les médias et la performance: corps, histoires et affectes insoumises". She is the author of Bodies in Suspense: Time and Affect in Cinema (University of Minnesota Press, 2017). At McGill, she directs the Moving Image Research Lab. This event launches CORÉRISC's research stream on reproductive horror media.