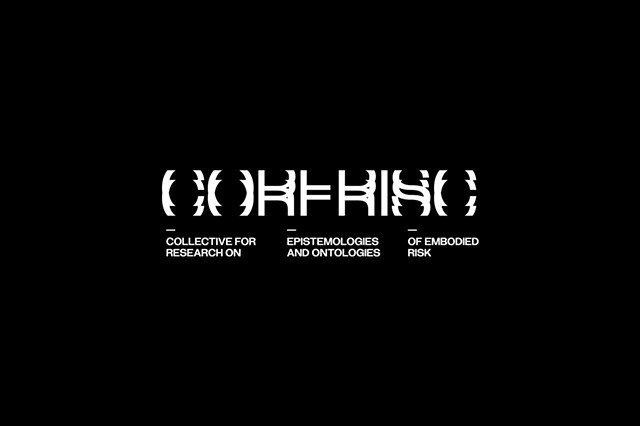 The Collective for Research on Epistemologies and Ontologies of Embodied Risk (CORÉRISC) is a new research team focused on how the idea of embodied risk provides access to alternative ways of knowing and being in the world in dialogue with intersectional queer and feminist theory. Today, interdisciplinary cultural theory is wrestling with three critical senses of risk. The first considers knowledge and experience of risk, the lived, embodied risks that differentially inform human and nonhuman lives: structures of violence, slow death, marginalized identities, and more.

Intersectional queer and feminist thought have taken these up in multiple ways, such as Butler’s work on vulnerability (2016), Hartman’s work on slavery’s archive as “a death sentence, a tomb, a display of the violated body” (2008) or Stanley et al’s (2017) assessment of visibility for trans subjects as a ‘trap door’--at once a site of deadly capture that puts into question presumptions about the value of “positive representations”, and at the same time, as a form of escape. This last formulation demonstrates how attention to horror tropes and survival tactics (the trap door) in queer and feminist thought can produce novel epistemologies and methodologies for the study of visual and performance culture. The second consideration concerns knowledge at risk: forms of cultural and knowledge production that are at risk of being lost because they emerge from minoritarian communities, marginalized social groups, and marginal cultural forms. Such knowledge maybe subtended by vibrant lifeworlds, but not find a sustainable home in state archives or dominant orders. This is also where embodied knowledge can be found. For knowledge at risk, affect theory has provided a powerful tool for study and analysis. As Cvetkovich puts it, “affect is a way of charting cultural contexts that might otherwise have remained ephemeral because they haven’t solidified into public culture” (2008, 48).

These demand pragmatic action not simply to identify and preserve, but to change our habits of research, engagement and dissemination to account for complex histories of survival and endurance. It can also represent forms of knowledge that are underrepresented in the academy. This project’s focus on researchers versed in affect studies, queer theory, feminist studies and cultural studies all draw on interdisciplinary academic traditions that are rooted in these forms of knowledge. The third way concerns risky forms of knowledge. These directly challenge normativity and the status quo. Film theorist Carol Clover’s Men, Women and Chainsaws (1992), for example, was a risky form of knowledge when she theorized that male spectators of violent slasher films were themselves subject to the risks of identifying with vulnerable female bodies onscreen. This work helped moved genre analysis beyond the question of “positive representations” and remains highly relevant today (Paszkiewicz and Rusnak 2018). A 2017 Google study found that horror is the genre where women have the most onscreen dialogue (“Using Technology to Address Gender Bias in Film”).

Attending to the risks of “bad objects,” our work looks to push beyond conventional understandings. Across critical theory today, thinkers are proposing that concepts like the “ghosts and monsters” of a “damaged planet” (Tsing et al 2017) are not simply diagnoses of negative conditions, but reframings of our ontologies and epistemologies relevant to an entangled world of affective relations. Indeed, Haraway (2016), asking us to “stay with the trouble”, has proposed renaming ‘the anthropocene’ to the ‘Chthulecene’, a name that directly connects risk, horror and potentiality in an intersectional feminist reworking of HP Lovecraft. Haraway’s speculative and playful citation of horror is no accident, but models how we can rethink the question of embodied risk today.